Posted on May 29, 2014 in Truth or Consequences
Tags: 21 days, City of Health, downtown T or C, hot springs, spa treatments

Writer Charles Bennett, in an article published in the February 2005 New Mexico Magazine, describes how early 20th Century Hot Springs New Mexico was “gaining recognition as a health center with its sodium-potassium-chloride-rich water.”

The hot springs aquifer that sits underneath modern-day downtown Truth or Consequences has for thousands of years produced 2.5 million gallons per day of piping hot mineral water, known for its abundance, clarity and lack of odor, and high mineral content.

In 2013, specialists from New Mexico Tech were hired by the City of Truth or Consequences to conduct a study on the geothermal aquifer. Hopes were a proper study could dispel concerns that the aquifer might be compromised by over-drilling, under-monitoring, and other factors.

The result of the study is available online — you can download it here. (A study from 2002 is also available.)

The report seems to indicate that aquifer is doing fine, but in all honesty the document is scientific and therefore a bit beyond our understanding. Nevertheless we were able to extract a few juicy details, such as:

“The immediate geothermal “reservoir” for the heated waters is the limestone underlying the district.” (Thank you limestone basin.)

And “relatively constant concentrations of [minerals] are due to local equilibrium with minerals in the confined aquifer supplying the geothermal water.”

The constantly concentrated minerals mentioned in the aquifer study are Ca2+ (Calcium), Mg2+ (Magnesium), HCO3- (Bicarbonate, which plays a crucial biochemical role in the physiological pH buffering system – explaining the ph neutrality of the waters perhaps?) and SO42- (Sulfate).

The happy upshot here seems to be that the water flow and its mineral concentration do not presently seem to be fluctuating abnormally or otherwise imperiled. So! Bring on the recreational soakers and those who seek the therapeutic powers of our water.

Health Practitioners of the Past

As far as healers that practiced during the City of Health‘s heyday, one name is mentioned above all others: Magnolia Ellis (pictured at right).

Her renown may be due to the sheer numbers of people she treated (lines out the door), her healing via a “magic spark,” or the fact that the office still bearing her name is located prominently on Broadway in downtown T or C.

Magnolia Ellis directed her patients to soak daily while they were undergoing her treatments, and frequently prescribed a 21 day soaking program as part of her treatment package.

Meanwhile Edna White M.D. saw patients out of her office at the corner of Mims & Austin, in the heart of the hot springs district, beginning in the late 1940s. Dr. White is mentioned (and pictured) in a book on Truth or Consequences by Sherry Fletcher and Cindy Carpenter.

Dr. White is said to have used a “myriad of science fiction machines” according to this online source that lists a few healers in Hot Springs / T or C’s history.

Charles Bennett’s 2005 story goes into some detail about one interesting local health advocate, Newton “Jack” Keas, who came to town to join the many who “attended to the needs of health seekers in Hot Springs.”

The fact that Keas is rarely mentioned among other healers of T or C’s past cannot be blamed on a lack of interesting developments in his childhood and early adulthood. Keas’ story includes some fascinating twists and turns, such as his role as a 2-year-old kidnappee in a crime that was solved years later thanks to an El Paso movie-house newsreel. And though he nearly smoked and drank himself into an early grave as a young man, he managed to turn things around in a big way, becoming  a spokesperson for health and vitality. 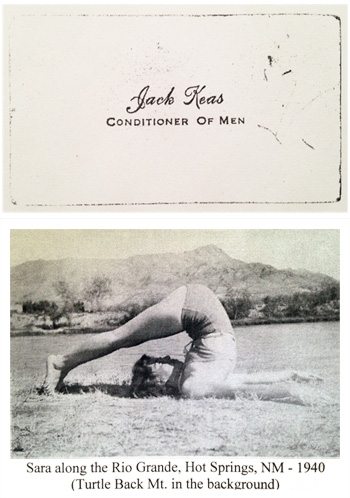 Keas settled in Hot Springs some time after 1938, and lived here for a few years with his suitably nimble and athletic wife, Sara (she’s pictured at left in what we are calling the “Turtle Mountain” pose).

Jack Keas’ business card read “Conditioner of Men,” and he worked as a hot pool therapist at the Carrie Tingley Hospital for Crippled Children (the modern-day State Veterans Home), as well as being a spa / sports masseur, wrestling promoter, and as journalist for various periodicals including the Hot Springs Health City News (“A Clean, Independent Newspaper, Published Every Friday”).

Bennett’s article describes the 21 Day Soaking Regimen (as touted by Keas in the monthly New Health): “21 baths were generally sufficient for rheumatism and other ailments. Ten minutes in the hot water was considered adequate” and each soak was followed up with a 30 minute blanket wrap to continue the sweat.

Through the years, Truth or Consequences has continued to attract healers of all kinds who explore and dispense numerous modes of treatment. (See our section on massage and spa treatments.) 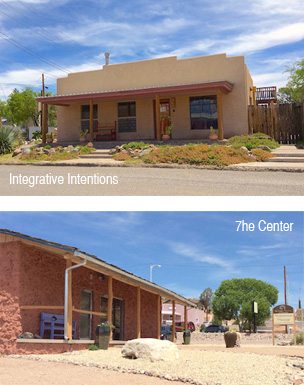 Nineteen businesses and individuals are listed under “Healing Arts” in the index of the 2014 Sierra County Artists Directory, an advertising booklet that’s available at businesses all over Sierra County.

One of the newest treatment facilities is the 7he Center, which advertises acupuncture, massage, coaching, and herbal and nutritional medicine at the corner of Foch & Main.

And Hot Springs Wellness Clinic, at the site formerly known as Dave’s Cloverleaf, is currently the only clinic in the United States that incorporates healing hot springs for hydrotherapy as a holistic part of a patient’s treatment plan. The clinic is near the corner of Daniels and Marr in the Hot Springs District.

Clinic owner Dr. Joanne Love uses medical hydrotherapy modeled after successful, holistic treatment plans that have been used in European, South American and Asian countries for over two thousand years. These mineral-infusing hot springs treatments are covered by many insurance plans as part of a comprehensive treatment plan which can range from two to six weeks, depending on the severity of the condition being treated.

Dr. Love is currently developing treatment plans that include 21 consecutive days of soaking in the springs, though a shorter series of soaks can also be highly beneficial. At present there is one bath on the Wellness Clinic property, with a few more to come. Dr. Love’s patients will take the waters in-house or at other hot spring spas around town.

The benefits of bathing in geothermal hot springs such as those found in Truth or Consequences have been studied extensively and are shown to improve joint issues such as rheumatoid arthritis, osteoarthritis, ankylosing spondylitis, low back pain, and sciatica; skin disorders including psoriasis, atopic dermatitis, acne, rosacea; and other conditions like low thyroid, gynecological problems, auto-immune deficiency, anxiety, depression, insomnia, and hormone imbalances.