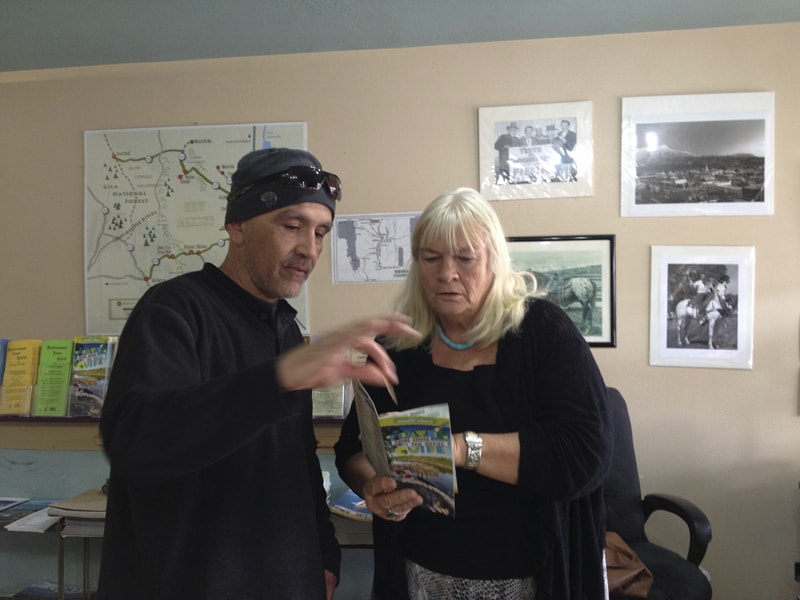 She loves to camp and has been all over the state. She asks her visitors where they’re headed and points out sites they must see along the way. Or, she suggests an alternate route to take them past something she doesn’t want them to miss. “I’ve sent a lot of people to Chaco,” she says, referring to her favorite canyon.

If you speak to Isabelle, it becomes apparent she isn’t from here. She grew up in England, in the green and wet, but now has settled in the dry desert southwest. Before coming to Truth or Consequences she lived near Mount Shasta in California. The winters were cold. She visited T or C one February and could stroll around in shorts and flipflops. She was sold.

Soon she began working in tourism and exploring New Mexico in her spare time.

“Personally I love this job. It’s the second best job I’ve ever had,” she says. “Most delightful job — it really is, because people come into the center and they’re happy.”

Alas, after four years of telling visitors about the wonders of our town and state, Isabelle is going exploring. Funding for her position has ended and we will truly miss her enthusiasm at the Visitor Center.*

We know, whatever she chooses to do next, she’ll still be meeting travelers and sending them to the best spots.

*Isabel has agreed to volunteer, just a little, “as needed.” Hooray! Maybe you will see her at the Geronimo Trail Visitor Center after all.

If not, rest assured, there are other capable volunteers on the job to answer questions and give pointers.