The Haunting Melodies of Ana Egge This Saturday in Hillsboro 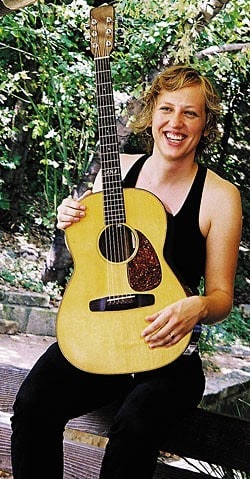 Ana Egge‘s folksy music is light and heavy at the same time. Her lilting voice floats words across the airwaves like clouds drifting on a lazy summer day. But her subject matter makes you sit up and take notice of those clouds before they drift out of view.

Jim Caligiuri, writing for the Austin Chronicle, said this of Egge: “The quiet, homespun folkie living here in the late Nineties has been supplanted by a NYC singer-songwriter with an East Coast edge.”

Egge grew up dividing her time between North Dakota and a commune in NM. When she was still young, she struck out on her own and moved to Austin to sing and writes songs. She has lived now in New York City for a decade. And that singer-songwriter with an East Coast edge is bringing her contemporary, sophisticated music to Hillsboro New Mexico this Saturday. Her most recent album, the Steve Earle-produced Bad Blood, takes on a dark subject. She writes in a straightforward way about the emotional fallout she experienced after a loved one suffered from mental illness.

Sounds a little dark, doesn’t it?

Egge has a way with words, though, and a light-as-a-feather voice. She uses basic rock song structures, has clear folk influences and employs a subtle use of vocal harmony. Her mild rhythmic syncopation and mixed acoustic and electric instrumentation will gently rock your soul while her words fill your ears and your mind. And if that isn’t enough to keep Egge’s subject matter from sounding too daunting, there’s another reason to come out for the show Saturday.

The wine bar will be open following the performance, according to McKray, as will the museum and the Historical Society. A B&B can be found in Hillsboro if you travel out there for the show and want to spend the night.

Egge’s songs beg for an intimate performance setting. The Hillsboro concert series, taking place at the Hillsboro Community Center, is small. Usually about 25-100 people come out to see a show there, according to McKray.  Egge’s performance this Saturday will be the first one of the series for the new year.

Additional shows at the Hillsboro concert series are already lined up: