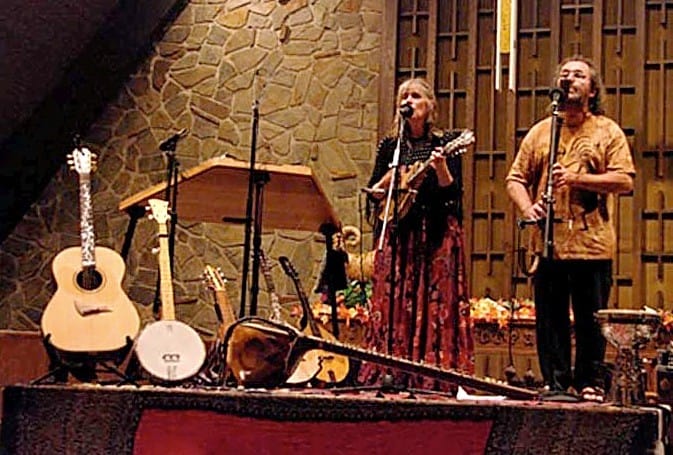 The Celtic Feast of Samhain (pronounced ‘sow-in’) is Irish-Gaelic for ‘the Summer’s end,’ marking the end of harvest, the beginning of Winter, and the Celtic New Year. Traditionally observed at the end of October, Samhain is considered a celebration of life over death, and a time to remember those who have left the world of the living. In the Celtic tradition, candles were lit at the graves of loved ones and bonfires built throughout the countryside. They believe that the borders between the world of the living and the dead are thinner on this night – also known as ‘Ancestor night.’ Halloween is based on this tradition.

Christy Martin and Og love their life as traveling troubadours. Through their lives and the wide range of world music they share, they wish to convey encouragement to one and all to follow their gifts and dreams.They have found that their trust in the kindness and goodness of others has lead them to amazing experiences, and the awareness of how music connects people with a common thread of shared human experiences, fostering respect and understanding.

On their last trip to the southwest, in 2003, the Albuquerque Journal reviewer wrote “The wavering, mystical tones of the sitar hover behind the Celtic melodies like a sari-wrapped ghost hovering over the moors….the duo bring an experimental spirit to traditional music, mixing Irish, Indian, and American influences into a sound as multi-cultural as a U.N. meeting.”